I’m very disappointed in CNN here. Making a racist comment, and calling someone a “cunt” are nowhere near equivalent. One belies an ideology that was used for centuries to rob an entire class of people of their basic human rights. The other is a personal insult. Here is the “offending” video:

The history of comparing African-Americans to monkeys goes back around 500 years or so. More apropos, if one were to read the prevailing scientific journals of the 19th century around the time of the American Civil War, you would see a hierarchy like this: 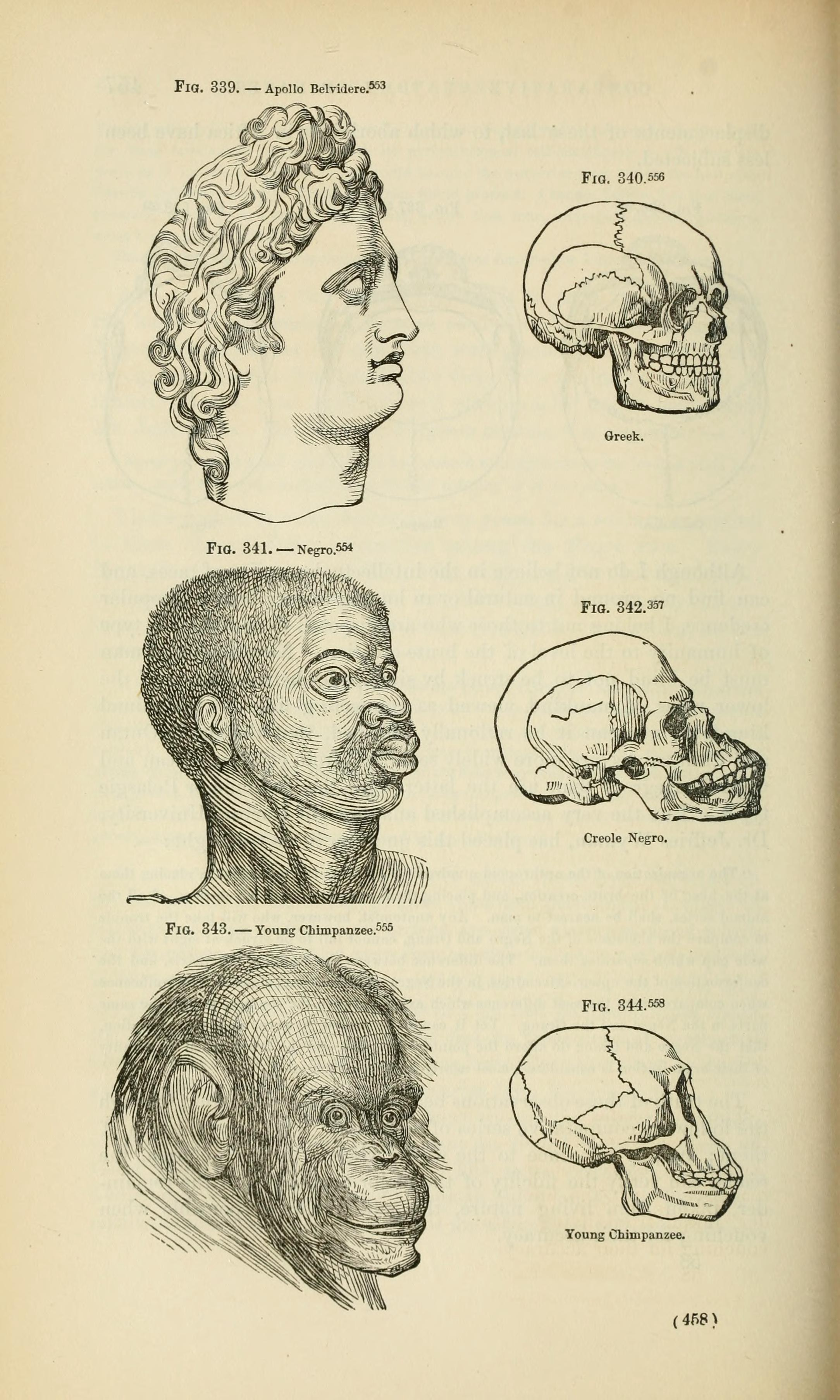 This was used to justify denying African-Americans an education, the right to vote, and pretty much freedoms of any kind. To this day it remains the crux of the argument for white supremacy by it’s adherents. You’ll also find similar myths in Nazi propaganda about the Jews, and we all know how that history went down. It’s long been proven to be absolutely false, pseudo-scientific bullshit, and it is completely indefensible. This is the context in which a comparison of an African-American to monkey’s resides; institutionalized racism. One may be forgiven for making this mistake if they’re a toddler, ignorant and unaware of the historical context. A 65 year old woman born and bred in the USA on the other hand has no excuse whatsoever. If you have lived 65 years in this country and have somehow remained ignorant of the historical context of such comparisons, you need to put down the Ambien and pick up a history book.

The word “cunt” has no such historical context. It doesn’t invoke a racist ideology or imply justification for the systemic repression of anyone’s rights. It’s a pejorative or invective that is used predominately against women, yes, but that’s pretty much where it ends. It says that “you”, the target of my contempt, are the contemptible one. It does not imply contempt for all women. Hard core feminists may disagree with that, but nobody has used the word “cunt” to advance the pursuit of systemic female repression. It may be crude and offensive language, but it also happened to be accompanied by legitimate criticism. Rosanne’s comments on the other hand were nothing remotely resembling legitimate criticism.

Arguing over who should apologize for whatever perceived slight has occurred is a red herring. Clearly an apology from Roseanne Barr has had zero impact, and why should it be accepted? Racist comments such as her’s strike far deeper than just surface level insults. It belies an entire outmoded way of thinking, and is an implicit nod toward centuries of racial injustice. It represents a giant step back from the hard won gains that African-Americans have made in American society. In other words, it’s not just a direct insult, but a slap in the face to anyone with African ancestry.

This false equivalency has been nothing more than an attempt by the Trump’s et. al. to muddy the waters by inserting themselves into a controversy that has nothing to do with them. These white, rich and privileged assholes who currently inhabit the White House are playing the victim, and CNN has just taken the bait and ran with it. Furthermore, this administration has yet to disavow any racist statements made by their supporters, so if you’re outraged by Samantha Bee’s insult to Ivanka and not by the fact that our president continually defends racists, you’re outrage is woefully misplaced.